Judiciary has been one of the crooked pillars of the state of Pakistan since its creation. With certain exceptions our judicial history is full of decisions that always sided with the powerful dictators rather than justice itself. It is the judiciary that has always come to support desecration of constitution by despots.
Social commentators, more than often, blame the political parties, military and the bureaucracy for failure of democratic process in Pakistan and absence of any good governance. There is need to acknowledge the role all levels of judiaciary has played in providing overt legal support for time and again molestation of the constitution. Compliant judiciary has been a tool in the hands of dictators right from the inception of Pakistan.
There couldn't be a phrase filthier than "Doctrine of necessity" that our superior judiciary has used for justification for usurping of democratic rights of people of Pakistan. Atrocities committed by our superior judiciary include:
History provides evidence that Judiciary in Pakistan has time and again sided with the idea of "might is right" becoming a helping hand in subversion of constitution rather than guarding its sanctity.

Even when some honourable judges tried to stand up to the tyrany they were stabbed in the back by fellow judges as is evident in the case of CJ Syed Sajjad Ali Shah and later CJ Iftikhar Muhammad Chaudhry. Fellow members of judicary were easily available to stand up and give support to the those out to subvert any notion of independence.

Since the sacking of CJ Iftikhar Muhammad Chaudhry by General Musharaf in November 2007, for the first time in Pakistan's history, civil society through Lawyers Movement is leading the battle to help Judiciary deal with an identity crisis. CJ Chaudhry representing a not so long line of upstanding judges like Justice George Constantine, Justice A.R. Cornelius, Justice Dorab Patel and Justice Rana Bhagwandas - all men of great integrity, pitched against CJ Abdul Hamid Dogar and others representing a longer line of preachers of the "doctrine of necessity".

Who wins this battle will determine the future of state of Pakistan. To survive as a nation we need to ensure that we have a judiciary independent of financial and administrative control of the executive. I hope that the lawyers movement results in reinstatement of judges sacked by General Musharaf. This need to follow necessary provisions made in the way we appoint judges to apex courts which should be based on their ability, competence, integrity and courage. Judges with moral courage and willingness to take principled stand on justice are the only hope we have.
Posted by Chaudhry Javed Iqbal at 14:31 No comments:

Staying quiet any more is a crime against humanity!

"Heaven on earth" Swat valley has been bleeding for many months now at the hands of thugs branding themselves as local "Taliban" movement. It is a catastrophy that the state of Pakistan has so easily c 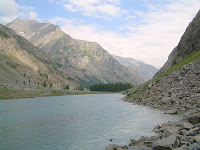 apitulated under pressure from these mindless criminals who have been terrorising the local population for over a year and has agreed to impose some form of "Sharia law". For Taliban movement Sharia appears to be nothing more than imposing their own brand of dictatorship giving them ability to burn down girls schools, treat women like poultry, and chop hands and heads to satisfy their sadistic whims. They forget that in Islam you establish a fair and just welfare state before you can impose strict sharia law. I for one would like to see, one day, implementation of Islamic laws in Pakistan but not before a free and fair society and state is in place.

Present government of Pakistan has learnt a chapter or two from the rule book of ex military dictator General Musharraf on how to keep the world fooled about the dangers of growing fundamentalism in Pakistan while parleying with the small relegious fundamentalist minority in North and West of the country.

Silent majority in Pakistan has stayed silent for a long time. Using the power of vote the electorate threw out the corrupt so called islamic minded government in NWFP during the last elections. This was only a beginning - the majority needs to speak out. Dangers that Pakistan face today are more from within than from outside. Staying quite anymore is a crime against humanity.
Posted by Chaudhry Javed Iqbal at 09:41 No comments: