Multi-dimensional Yousuf Bashir Qureshi (YBQ): why there is still hope for Pakistan

The title is deceptive - This post is not about Yousuf Bashir Qureshi. This is about tens of young, innovative and passionate Pakistani youth whom I have been meeting over the last few months who give me hope, the reason and assurance to believe that despite hundreds of corrupt spineless "leaders" in all walks of life in Pakistan - there is still a future for my birth place. I have used Yousuf as an example of a passionate multidimensional representative of youth (yes! compared to me Yousuf belongs into "youth") who have the energy, the passion and the belief in future and are actually doing something that matters. Here is a summary of my three days with Yousuf Bashir Qureshi - and why I still have belief in future

I first met Yousuf Bashir Qureshi (YBQ) on 23 September 2010 at Nawab Restaurant in Manchester where we got together to have a look at the arrangements for the charity Fashion show being organised by International Foundation for Mother and Child Health (IFMCH). Yousuf had travelled from Karachi Pakistan on a non-commercial venture to help a fellow Pakistani raise funds for his charity that aims to do something about improving women's health in Pakistan.

Yousuf's dress sense evokes different emotions among people of different backgrounds. His designs have deep roots in country life in Pakistan and unlike many he wears his creations. Only Yousuf can combine a Dhoti and Kurta with an military cap and Converse shoes and make it look fashionable and cool. 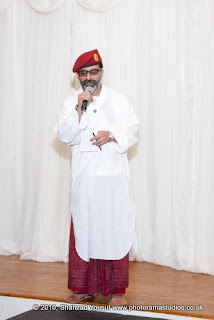 Second time I met Yousuf was a day later at the launch of International Foundation for Mother and Child Health (IFMCH) and saw the other side of him - a passionate charity worker who was promoting his charity United Pakistan while running an auction to raise funds for another charity IFMCH passionately pleading for everyone to come together to raise funds for the flood victims in Pakistan. Video recordings of work done by United Pakistan made every eye full of tears, hearts full of pride and hands went into pockets to get their Zakat out. 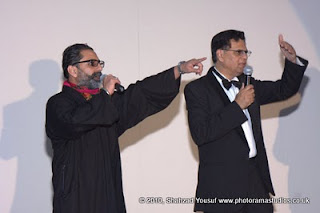 In our third meeting I saw his passion for Charity that was evident from his demonstration of Life Straw - a water purifying product specially created for poor 3rd world countries and can help provide clean drinking water for families and individuals for flood affected areas in Pakistan. His audience were a group of university students and charity workers in Cheshire who wanted to be involved in doing something concrete for the flood victims in Pakistan. YBQ's belief in the product was evident from the fact that using Life Straw he drank water from a stinking fish bowl that has not been cleaned for over a week. 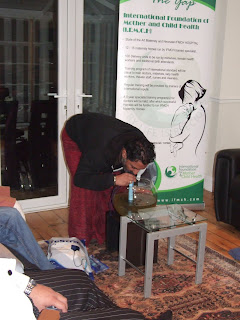 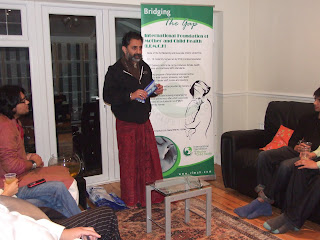 Then I heard him speak on the BBC Radio Manchester programme "Indus" passionately making a case for Pakistani youth and how they are the ones who hold future of this suffering country in their hands.

My last meeting with Yousuf was at the Manchester University where he was a guest speaker invited by Pakistani Students Society. 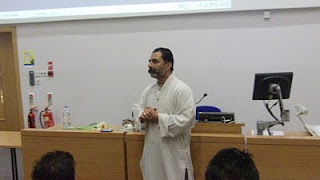 This what the Pakistani Students Society wrote about him

A talk to bridge the spiritual and scientific realm between one's brain and heart, how to prioritise the consistent conflicts between the two, and hence, how to become a better decision-maker in life.
...
From the man who revolutionised tradition, transcended the boundaries of fusing cultures, gave the values of heritage a fresh, new face - Yousuf Bashir Qureshi, one of the most versatile and talented men of his age from Pakistan. A food scientist, fashion designer, philanthropist and humanitarian, YBQ takes pride in being one of the rare few who use their potential and artistic skills to change the world around them, and is of the belief that through art and artists, we can actually build the soft boundaries that we hear politicians talk about globally.

Having graduated as a food scientist and having served on the faculties of FIDM, Los Angeles, FIT New York, and then in Pakistan at the prestigious Indus Valley School of Art and Architecture in Karachi, YBQ hails from a long standing educational background. He has given a number talks at Universities, Colleges & Schools alike around the globe, and is especially reputed for his command on the topic given above.

Images and list of activities above were only a fraction of various other activities and events YBQ was involved in infusing passion about Pakistan. He was at pains to highlight that not everything is rotten in Pakistan and not every official functionary is corrupt and useless. Pakistan is country of over 170 million population and only a fraction of the population is responsible for the ills the nation suffers from. The biggest asset the country has is the growing size of youth who have not yet lost the desire to do good and bring change.


Posted by Chaudhry Javed Iqbal at 11:33