Some say that the UK citizens are suffering from Charity fatigue. Statement doesn't hold true when you hear heart rendering stories like the British Council staff in the UK who have just completed a gruelling triathlon covering the equivalent distance of the land boundary of Pakistan to raise money for the flood-devastated country.

On 27 September, the final kilometre out of 6774 was covered ensuring that the team completed their challenge in just 27 days.

The worst floods to hit Pakistan in recorded history have affected an estimated 20 million people, with six million in need of food aid. Although emergency relief is now well under way, the long term reconstruction needs are enormous. The UN estimates that over 10,000 schools have been totally or partially destroyed. 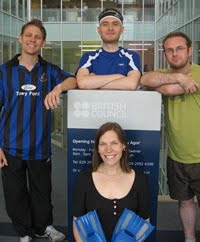 In the picture one can see Cardiff team runners (from left to right) Bill Burson, Owain Wright and Sebastian Graca Da Silva and swimmer Edwina Lewis-Chaston, who between them covered over 500km for the triathlon challenge.

Reacting to the apparent donor fatigue in the UK, Tom Birtwistle, External Relations Officer, at the British Council decided that an ambitious fundraising challenge was needed: ‘I thought the idea of a team triathlon covering the perimeter of Pakistan sounded taxing enough so I started recruiting people to join me.’

Twenty-three members of British Council staff, including Chief Executive Martin Davidson, came forward wanting to help. ‘I’ve really enjoyed being part of a team of colleagues raising money for a part of the world which has suffered so much and is an important part of the British Council family. My only problem has been forcing myself out of bed for when the swimming pool opened at 6.30 in the morning,’ said Martin.

Edwina Lewis-Chaston, Project Delivery Officer, managed to notch up the miles despite being five months pregnant: ‘Within the big challenge my personal aim has been to swim a kilometre a day, but having four extra arms and legs didn’t help me swim any faster!’

‘The more I read about the relief effort the more I realised the urgency of the cause. If we can help keep the issue on the agenda, let’s – it’s the right thing to do,’ she added.

In response to the £3,642 raised to date for the Disasters Emergency Committee, David Martin, Director Pakistan, said: ‘We are heartened and encouraged to hear that colleagues in the UK are showing solidarity with Pakistan.’

He added that British Council staff in Pakistan have been donating to the Edhi Foundation, with generous donations made during Ramadan (the traditional time of giving - ‘zakat’ - to those in need).

Further fundraising activity in the UK offices for those less keen on a physical challenge included a cake sale this week which raised over £400.

There is still time to contribute to the campaign by visiting the team’s Just Giving page.
Posted by Chaudhry Javed Iqbal at 11:57