General Musharraf comes out of facebook to face real people

General Musharraf showed glimpse of a seasoned politician when he kept a smile and a brave face when activists of Hizb-ut-Tahrir tried to disrupt his speech at the launch of his political party in Manchester on 09 October 2010. Though Hizb activists unwittingly chanted slogans in favour of Khilafat (Islamic government) rather than anything against the budding politician himself - giving him the opportunity of being magnanimous and asking the bouncers (there were plenty of them) to be polite when throwing the culprits out. Hizb did better job at disrupting the proceedings than a few hundred Pakistan Muslim League (N) activists outside the venue.

So the General has finally come out of the Face book and is ready to face the real people in the real world. Unfortunately people running his Face book profile are doing a better job at getting him more fans (over 10,000 more joined since the launch of his party) than the people who were running his first forte in civilian public speaking in Manchester. If he is to do any better in the UK he must get some professional help. A political 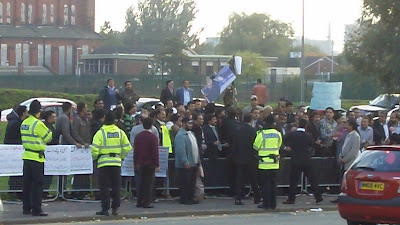 rally that right up to his arrival on stage gave the impression of a badly organised religious ceremony (Ghiarveen Shareef) does not bode well for a new entrant into politics. In his hey days he would have sacked the whole organising team if it was not for the clinical efficiency of megaphone wielding bouncers whose second job it was to blare slogans shamelessly stolen from the books of Islami Jamiat-e-Talaba or Nawaz Sharif's party.

Once on stage the General did not do a bad job as an orator himself. In his own peculiar style he challenged every and any opponent - from the Bugti youngsters to Sharif elders. He had obviously done his homework regarding what the media has recently been criticising him for and attempted to answer all the headlines:
What I did not hear at the rally was a manifesto - a plan to pull Pakistan out of the abyss created by those who are leading Pakistan now courtesy the NRO gifted to them by General Musharraf himself - he is now, on record, sorry about that though.

There was a vocal opposition presence outside the Sheridan Suite with the usual effigies, shoe beating, name calling, and cracker firing antics.

And I must mention the six or so Caucasian MI6 hunks providing the ever needed security to the General. I strongly believe that our ex heads of state should get the level of security that is commensurate to their stature. I wonder after what happened to Benazir, General Musharraf has stopped trusting our own security services!!!

With a political party launch in Manchester of around 3000 people inside the hall the Pakistan Muslim League of General Musharraf has made a good start. One question he and his political team should ask everyone who appear to be supporting them is - "when was the last time you voted in an election in Pakistan?" I asked this question to a number of people who actively support General Musharraf and the answer was never. When asked how do you think that you can get General Musharraf elected back into the government their answer is "through back door - there definitely is a deal with the Americans". I believe that like any other ordinary Pakistani General Musharraf has a right to enter democratic politics. But, this is your biggest challenge Mr Musharraf - those supporting you don't appear to believe in democratic process or elections.
Posted by Chaudhry Javed Iqbal at 16:24