Pakistani poets in struggle for democracy

I have been planning to write about the importance of literature in general and poetry in specific in highlighting a nation's state of mind at a particular stage in its history. A friend at the British Council (Anwar Ahmad) beat me to this by sharing the following message which unfortunately my readers who cannot read Urdu will not be able to appreciate fully - apologies for that. Anwar wrote:
"piece of good news coming from Pakistan - which is likely to go unnoticed largely - is that finally the government has decided to award posthumously the highest civil award to a man of letters, no less than Habib Jaalib. Jaalib, who belonged to a, [economically] lower class family, fought all his life for civil liberties, democracy and the people of his country. He would have been a great romantic poet had he not devoted himself to writing 'revolutionary poems'. When he started writing poetry, his famous ghazal was much appreciated by the critics and readers alike. The first bait [verse] was:

But as a true revolutionary, he suffered a lot. His family often did not have any resources to lean back upon while he was in jail. When he wrote his famous poem, Dastoor, on the 1962 constitution, Ayub administration did not tolerate it. And only someone like Jaalib could be so indiscrete:

When we think about the [recent] restoration of judiciary, we should not forget many people who fought for this cause in the most hostile conditions in the absence of any media on their back. And how can one forget his great poem when [military dictator General] Zia's Martial Law administration was trying to silence every voice which did not endorse his philosophy. Jaalib was beaten up on the Lahore's Regal Chowk. A police officer kicked him [repeatedly], on writing against Zia. And what a beauty the poem was. Who says that propaganda can not be artistic: 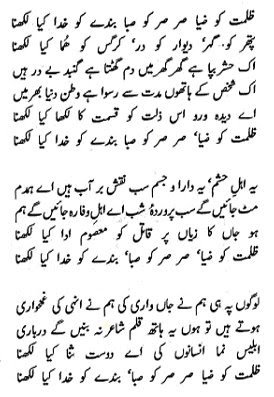 His widow refused the government grant when it was offered after his death. PPP applauded him when it was in opposition but in government it was hardly any different to him. He and his family lived a difficult life. I end the message with his ghazal which describes his ideology in his own words: 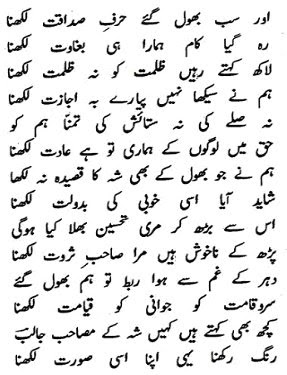 Posted by Chaudhry Javed Iqbal at 12:41