Kishwar Naheed's heart rendering lament on Ameen Guljee's decision to leave Pakistan to find security for himself abroad highlights the scale of continued migration of sensitive souls from Pakistan.

Artists whose patriotism and loyalty to Pakistan, its soil and people has never been in doubt have been under continuous pressure from forces that include economic, political and religious - though it is the last one among the three that attracts media coverage in and outside Pakistan.

Murder of Ismail Gulgee apparently for money and later reported harassment of Ameen Guljee at the hands of Qabza Groups (illegal land and property grabbing Mafia) is another turn of events for long suffering artists fraternity. Many in Pakistan believe that professional and artistic and professional brain drain towards west is primarily economically motivated. Plight of my favorite singers Mehdi Hassan and Alamgir while living overseas defies the argument.

Reshman, the legendary singer from the borderless deserts of Southern Punjab and Rajasthan, is dying of a serious ailment. Recent footage on television showed a frail woman who had lost her zest and fire. The state has done next to nothing for her. It was after the entire country cried and wailed that the king of melody, Mehdi Hasan was given partial financial support to cover the exorbitant cost of his medical treatment.

We blame religious fundamentalists for most of the atrocities against arts in our society but the problems lies else where too.

Persecution of artists that was made and art form by the father of present day Talibans by his persecution of Habib Jaalib and Naheed Siddiqui continues under the present day democratic and free institutions. Attempts to curb artistic freedom through political jingoism or to use of institutions of law and order is on the increase.

Why are the state institutions, whether executive or non-executive, anti-culture in the land of the pure? As it is, the state has successively and insidiously destroyed the thousands of years of plural culture over the last six decades. Ghalib is “Indian”. Amir Khusrau is good if he is acting as a good Muslim, and the devout Islamic scholar Abul Kalam Azad is spurned because he believed that Muslim identity would be protected in a united India.

We have complained enough about the barbarians of Swat who murdered the local singer Shabana, for she represented evil. Now evil is culture for the anti-culture polity that Pakistan has become. 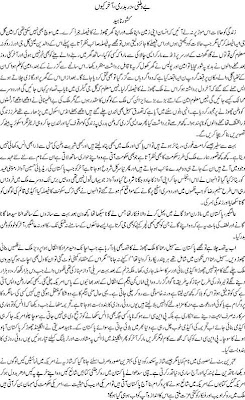 Posted by Chaudhry Javed Iqbal at 16:04