Justice for "Grey Lady of Bagram" and her children

Three images in this blog post are those of a Pakistani woman transformed from a brilliant MIT graduate to a ghost of an immoral war.

For those who care about the sanctity of fundamental human rights in this insecure world she is known as the "grey lady of Bagram" or the "Prisoner 650". She is Dr. Aafia Siddiqui whose name has become a symbol of victims of belligerent disregard for all international laws, morals and values. It is alleged that the modern day Bounty hunter and human trafficker General Musharraf of Pakistan sold her in return for a bounty from US through his son Bilal Musharraf. Whatever crimes (or intentions to commit them) Dr. Aafia is charged with cannot be bigger then the crime committed by dictator Musharaf and all security agencies involved (Pakistani, Afghan and the US) that of detaining, torturing and raping a mother of three young children who were all taken away along with her. No legal or moral arguments justify this inhuman behaviour. At the time of her kidnapping in 2003 by Pakistani security agencies she was 30 years of age and mother of three children the oldest of which was seven and the youngest only six month.

Dr. Afia Siddiqui, who studied at the Massachusetts Institute of 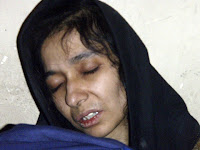 Technology, US, for about 10 years and did her PhD in genetics was a devout Muslim and believed in preaching and spreading Islamic teachings while studying and researching science, and being a regular mum. Her passion for preaching of Islam is evident from one of her writings "Imagine our humble, but sincere daw'ah ["making an invitation"] effort turning into a major daw'ah movement in this country! Just imagine it! And us, reaping the reward of everyone who accepts Islam through this movement, through years to come . . . Think and plan big." She sounded and behaved as a preacher not an Al-Qaeeda muderer. Her writings and research were above board as she was winning grants like $5,000 to study the effects of Islam on women in Pakistan.

But not according to US law enforcement agencies. According to US National Counter Terrorrism Centre: "Siddiqui, charged with attempting to kill US officers and employees, was arrested in Afghanistan on 17 July 2008 for suspicious behaviour. On 18 July, she attempted to shoot a US military officer. She was transported to the United States in August."

How much of this is true! It is on record that she and her three children were kidnapped from Pakistan in 2003, never to be seen again. Former captives of Bagram prison in Afghanistan have reported that a female prisoner, prisoner 650, was held there and that she has lost her sanity, and cries all the time. British journalist Yvonne Ridley wrote about Bagram's "Prisoner 650" and her ordeal of torture and repeatedly being raped for over four years "The cries of (this) helpless woman echoed (with such torment) in the jail that (it) prompted prisoners to go on hunger strike." Ridley called her a "grey lady (because) she (was) almost a ghost, a spectre whose cries and screams continue to haunt those who heard her." By all accounts this "Prisoner 650" was Dr. Aafia Siddiqui.

Dr. Aafia is now formally in US custody and going through a media and legal trial. Whether she gets justice is still to be seen. There are big holes in the story of her whereabouts as presented by Pakistani, Afghan and US agencies. None of these agencies have given any satisfactory account of what happened to the three children from 30 March 2003 onwards. What crime did they commit for which punishment was incarceration along with their mother. Would this have happened to to western women and her family, whatever their crime...

Now that that Judiciary in Pakistan is free of General Musharraf's diktats I urge Chief Justice of Pakistan to take suo moto notice of a Pakistani woman and her three children's ordeal at the hands of out of control security agencies. If there is evidence against Dr. Aafia she should be tried in a Pakistani court of law not in the US. And finally, bring the modern day bounty hunter General Musharraf to court for being complicit in the rape of a muslim women at the hands of Bagram security guards.
Posted by Chaudhry Javed Iqbal at 15:15