Pakistan has Laws, but not the Rule of Law

Closing line of the press release from Transparency International Pakistan announcing the publishing of results from 2009 National Corruption Perceptions Survey reads that "Pakistan has Laws, but not the Rule of Law". How apt! 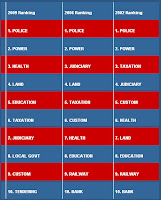 On a positive note survey reveals today Judiciary appears to be the institution that has been able to repair its reputation compared to last year and has moved from the coveted position of 3rd most corrupt institution down to number seven. I believe that this is more to do with the high regard and esteem that general public gives to Chief Justice Iftikhar Chaudhry and the continued trust that people have in his intentions and ability to change the judicial infrastructure for the better.

Judiciary are followed by the Media in enjoying public confidence in their ability to influence change. Movement by the civil society that lead to undignified departure of dictator General Musharraf, and subsequent reinstatement of judges sacked by him for defiance against tyranny would not have been successful if independent Media was not standing besides the civil society facing all sorts of oppression from the military and later civilian rulers. 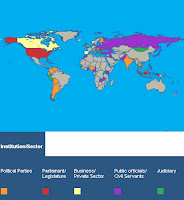 Biggest loser and rightly so is the Health sector i.e. the medical profession in Pakistan who are now perceived to be the 3rd most corrupt sector behind only the Police and Power (the electricity people!!!).

Unsurprisingly “lack of Accountability, “Lack of transparency ” and abundance of “Discretionary Power” in all walks of life are considered be to the root causes of spread of corruption.

There are some interesting results as well. Looking at the global corruption barometer produced by Transparency International [map below] I found it interesting that our regional neighbours India rate the Political parties as the most corrupt institution but not according to us Pakistanis. We give this dubious honour to our civil servants and public officials - although if asked the question who is the most corrupt person in Pakistan the honour will still be bestowed upon one Mr. Asif Ali Zardari our erstwhile president.

That brings me to the UK MPs who have become household names because of their household claims. The expenses scandal has resulted in some interesting media coverage and ways of exposing "within the rules" corruption. One interesting representation of this scandal is the heat map of MP expenses produced by MSN. One glance at the map gives you an idea of the scale of gravy train that the MPs had in place for God knows how many years. Click on your constituency and you can look at the details of what your local MP has been claiming from you during 2007/08. Made me wonder if we were to produce a similar map for Pakistan our green traditionally green coloured map would turn red hot all over.
Posted by Chaudhry Javed Iqbal at 15:55