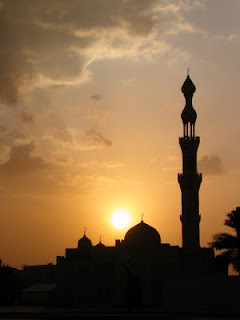 By some miracle this year a vast majority of Muslims in the UK managed to celebrate Eid-ul-Fitr on the same day (Sunday 20th September). Unfortunately this was not the case in Pakistan where people of the North West celebrated Eid a day ahead of rest of the Country. While the head of the Moon sighting establishment in Pakistan declared this illegal many like me wondered that how come in this day and age of science, when it appears all so easy to determine state of the moon, we still cannot agree on a single day for Eid. Anwar Ahmad, a good friend wrote the following article for Bazm-e-Iqbal to describe the issue in detail and offer possible solution.

Divided We Stand [by Anwar Ahmad]

It is again one of those occasions when the entire Muslim community enthusiastically pursues their favourite game, “moon sighting”. Or is it "moon fighting"? Generally a reductionist approach is observed and the issue is conceived as inability of the orthodox Muslims to comprehend, trust and apply modern technology. The issue is more complex than choosing between actual sighting of the moon and relying on scientific calculations to mark the beginning of an Islamic month.

So what is the issue, exactly? Before I comment on the existing approaches to determine the arrival of new month, let us briefly review the relevant Quranic verses and Hadith literature on the topic.

The Quran does not offer a clear injunction concerning the method which should be applied to establish the beginning of an Islamic month. In Surah Al-Baqrah, the Quran states:

they will ask thee about the new moons. Say: “They indicate the periods for [various doings of] mankind, including the pilgrimage.” [2:189]

A quick review of the Quranic verses that mention the moon does not provide any specific information as to what measure should the Muslims adopt to establish the beginning of new month.

So, what does the second source of Islamic law, the authentic Hadith collection, tells us about it. Well, here we are fortunate to find some specific information which would subsequently become the basis for our judgement on the issue.

Both Bukhari and Muslim report a tradition that the Prophet (saw) said:

It is reported on the authority of Hazrat Ayesha (ra) that the Prophet (saw) used to be more concerned about [determining the beginning of] Sha'aban than about other months.

Then he used to fast at the sighting of [the crescent of] Ramadhan. If it were obscure, he would count thirty days [of Sha'aban] and then fast. [Narrated by Abu Dawud and Ahmad]

There is a Hadith regarding the number of witnesses required to have sighted the new moon:

if two just Muslim witnesses testify the sighting then fast or break your fast. [Narrated by Ahmad, Al-Nassa’i and Al-Daraqutni]

There is, however, an authentic Hadith which informs us that the Prophet (saw) fasted and ordered other people to fast on the testimony of one person, in this case Ibn-e-Umar.

Having looked at the relevant Quranic verses and traditions of the Prophet (saw), we come directly to the most important question: is the “sighting of moon” a measure to establish the beginning of an Islamic month or a requirement? The answer will determine if we can use scientific calculations as a substitute measure to ascertain the beginning of a month. And this is precisely the point where opinion among the Muslims is divided. Both the proponents and opponents of actual sighting of the moon draw their conclusions on the basis of available Hadith and traditions.

A Hadith is reported by Ibn-e-Umar that the Prophet (saw), on the suggestion of using then available computational methods, said:

Imam Ibn Taymiyyah, who belonged to the Hunbali school of thought and professed the return to original sources of Islam, commented by saying:

the description of this nation here as being illiterate is a praise to it in that it is independent of any complicated means in performing its basic worships. Anyone who rejects this would indeed overstep the consensus of the worthy Ulema [religious scholars], would be attempting to spoil the beauty and simplicity of this religion, and, worst of all, would be bluntly disobeying the Prophet (saw).

There are some other traditions that are presented in support of the view that actual sighting is a requirement to establish the beginning of new moon.

Before I move on to discuss the reasons offered by the group favouring scientific computations, I would like to highlight another issue. This is related to the “local sighting” of moon. A tradition reported by Muslim relates a discussion between Abu Kuraib and Ibn-e-Abbas in which Ibn-e-Abbas did not accept Abu Kuraib's witness of sighting of the moon in a different town as the basis to begin Ramadan in Makkah. Let’s clarify this issue first. In the absence of any clear Quranic injunction and tradition of the Prophet (saw), it seems justified to deduct from the Hadith reported earlier that the entire Muslim Ummah [nation] has been addressed and not a people in a particular land. This issue is a remnant of a historical process. In the past it was difficult to send the news across countries and continents and hence local sighting was a necessity. All too often a tradition becomes sacred and thus remains in practice long after the requirements that necessitated it have disappeared.

From the discussion so far, it seems fair to conclude that:
When we consider the possibility of using scientific computation for the purpose of ascertaining the beginning of a new lunar month, we face two important questions:
The group which supports the use of scientific computations offers the following reasons in favour of their argument:
On the basis of these arguments, it seems fair to adopt scientific calculations as a means to ascertain the beginning of new month. Also experience suggests that scientific calculations offer more accuracy than actual sighting of the moon. A large number of Ulema [religious scholars] now maintain and support this view.

The answer to the second question has already been covered above. The emphasis on “sighting” and “witnesses” suggest that we can only accept “visibility stage” to establish the beginning of a new month. Geocentric conjunction of new moon does not mean that it will be visible [to human eye]. Technically, though, the new moon is ‘born’ but it cannot be sighted until it enters the visibility zone. It may take several hours before this happens. Whether we are able to sight the moon depends on weather conditions, pollution in the sky and location of the town among others factors. At this stage, however, sighting becomes somewhat less important because we know from reliable scientific calculations that moon would be visible if the sky is clear. This, however, is not a universally held view. Some countries, e.g. Turkey, consider the geocentric conjunction as the basis for beginning of a new month.

It seems fair to conclude from the above discussion that:
This, however, does not mean that no further issues will arise. Certain situations - such as if visibility of moon is confirmed for North America in the evening, people in the Far East may not be able to begin the new month on the same date in the Gregorian calendar – will continue to bother the faithful. However, as long as a unanimous position based on logic and common sense is held by the Muslims throughout the world, that should not be a problem. The rigidity of the Gregorian calendar makes it incompatible with Islamic activities. We don’t need to be apologetic about it. It would not bother me if my brothers and sisters in Australia and USA celebrate Eid on different days but I would be as I was shell shocked when, a couple of years ago, I offered Eid greetings to a Muslim neighbour and found out, to my utter embarrassment, that he was fasting.
Posted by Chaudhry Javed Iqbal at 16:54