What is common between giant Pandas and Kailash women - both are endangered species now. According to media reports there are 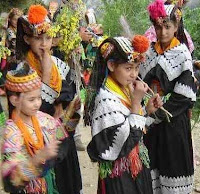 While Pandas are one of the most pampered endangered species on earth enjoying massive global funding and support to keep them alive in their natural habitat - there are those who want them dead.

TV wildlife presenter and personality Chris Packham has put forward his opinion that we should "pull the plug" on giant panda conservation, claiming the species "has gone down an evolutionary cul-de-sac" and we should "let them go".

Similarly Kailash people who are a fast disappearing civilisation decreasing in number without any support to maintain their indigenous life style and are now a target of Taliban fundamentalists who do not like their pagan life style and would like to either change them or finish them.

Kailash people believed to be descendants of Alexander the Great's invading army, were shielded from conservative Islam by the steep slopes of their remote valleys.

While Sikhs, Hindus, and Christians were slowly driven out of Pakistan's North West Frontier Province by Muslim militants, the Kalash were free to drink their own distilled spirits and smoke cannabis.

According to daily Telegraph Taliban are now targeting those who are helping build schools, clinics, clean water projects, etc. Why are Taliban rearing for wiping out an endangered civilisation because they are not Muslims? Muqtedar Khan writes that in an Islamic society the objectives of Islamic laws and the way of life are

falah (welfare) and hayat-e-tayyabah (good life) for the members of the community. But when contemporary Islamists operationalize this divine vision of the Islamic state, they define the Islamic state as that which implements the Islamic law.

...in seeking to impose Islamic law and create an Islamic state, Islamists are actually in direct opposition to the spirit and letter of the Quran. The Quran is very explicit when it says “there is no compulsion in religion,” (Quran 2: 256). Elsewhere the Quran exhorts Jews to live by the laws revealed to them in the Torah. In fact The Quran expresses surprise that some Jews sought the arbitration of the Prophet of Islam (peace be upon him) rather than their own legal tradition (5:43).

The Quran also orders Christians to live by their faith; “So let the people of the Gospel judge by that which Allah has revealed therein, for he who judges not by that which Allah has revealed is a sinner,” (Quran 5:47). From these verses it is abundantly clear that an Islamic state must advocate religious pluralism even to the extent of permitting multiple legal systems.

In an Islamic state envisioned by the Prophet (saw) and his companions Kailash people would be enjoying state protection (better than what Pandas get in China) and would be free to practise their religion and their way of life. In a Taliban infested North West Pakistan they are in danger of becoming a lost civilisation soon. Here is another begging bowl for our erst while president to carry on his trips abroad.

Posted by Chaudhry Javed Iqbal at 16:59