Hillary Clinton is apparently puzzled that Pakistanis do not know the whereabouts of Al Qaeda leadership. According to Reuters

U.S. Secretary of State Hillary Clinton's said on Thursday it was "hard to believe" that no one in Pakistan's government knew where al Qaeda leaders were hiding, striking a new tone on a trip where Washington's credibility has come under attack. 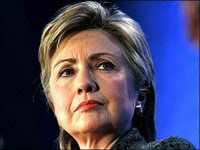 I am puzzled that US almighty who can spot drops of water on planet Mars can not pick out the most famous bearded face on earth from a bunch of Pathans from North West Pakistan - if he is really there alive and kicking. With the technological advances that help a lowly operator sitting in a remote CIA building in US wreck havoc on a far off village in Pakistan using unmanned drones, with the Blackwater operatives and other mercenaries active on the ground and with 24/7 monitoring of Pakistan through satellites, the US has been unable to seek and destroy those for whom Mrs Clinton is admonishing Pakistan in failing to apprehend.

I am not for a moment denying that Pakistan have a massive problem to deal with on the Afghan borders but US attempts to bully Pakistan into focussing only on the western borders is as foolish as was the US departure from the region after having internationalised the Afghan Jihad. Problem in Pakistan is no more restricted to Taliban (a very loose term by all accounts) in the West any more. Tentacles of religion based terrorism are now spread into moderate Punjab and are at at risk of becoming unmanageable.

Secretary of State could not find a formal link between Indian role in flaming insurgency in Baluchistan and RAW's hand in arming terrorism in NWFP but she also couldn't use her pressure to keep the buffoons like the Indian Defence Minister from adopting threatening postures.

I agree that current Pakistani establishment needs political pressure to keep up with the battle with Taliban. But US needs to realise that Taliban are only once piece of the Jigsaw if a long term and decisive victory against terrorism is to be achieved.
Posted by Chaudhry Javed Iqbal at 15:32