Writing for New Yorker Seymour Hersh has tried to launch 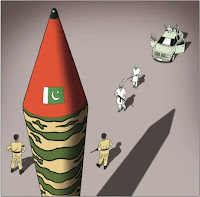 another scaremongering campaign against the security of Pakistani nukes. But this time the boogyman is not the usual piniata - a fierce looking beareded Taliban from the North West. For a change he is raising doubts on the integrity of Pakistani armed forces

The principal fear is mutiny — that extremists inside the Pakistani military might stage a coup, take control of some nuclear assets, or even divert a warhead.

We have operationalised a very effective nuclear security regime which incorporates very stringent custodial and access controls...as overall custodian of the development of our strategic programme, I reiterate in very unambiguous terms that there is absolutely no question of sharing or allowing any foreign individual, entity or a state, any access to sensitive information about our nuclear assets.

“We have confidence in the Pakistani government and the military’s control over nuclear weapons.”

Hersh has reiterated age old American desire of some how taking Pakistani nukes into "protective custody" to save it from barbaric Pakistanis.

Washington...has been negotiating highly sensitive understandings with the Pakistani military. These would allow specially trained American units to provide added security for the Pakistani arsenal in case of a crisis.

understandings on nuclear coöperation benefitted from the increasingly close relationship between Admiral Michael Mullen, the chairman of the Joint Chiefs of Staff, and General Kayani, his counterpart, although the C.I.A. and the Departments of Defense, State, and Energy have also been involved.

American scaremongerers like Seymour Hersh need to come out of the wonderland they are living in. Before talking about mutiny in the Pakistan army and trying to help secure our nukes you better pay attention to securing Fort Hood.
Posted by Chaudhry Javed Iqbal at 20:13