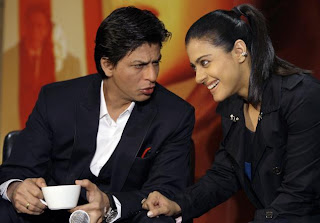 Shah Rukh Khan is paying the price for speaking out against what I believe is the Hindu fundamentalist hegemony in an apparently secular India. He spoke out against what was a shameless display of racially, religiously and politically motivated discrimination against Pakistani cricketers who wanted to play in the Indian Premier League. On pressure for certain quarters in India none of the Pakistani players was selected to play the league. I would rather they don't play the league in the first place.

But Shah Rukh had the balls to take a stand. He had said, of Pakistani players,

Do we love them? I think we immensely love them. And why do we suddenly jump up and say this is not good? I think we are being misled by a lot of things people say about us and them. And I truly believe that they should have been chosen.

Fascist Hindu fundamentalist party Shiv Sena have taken it upon themselves to teach Shah Rukh a lesson. They have sent letters to cinema-owners in Bombay, ordering them to remove posters of Shah Rukh's forthcoming release, My Name is Khan. Cinemas have also been warned not to screen the Karan Johar-directed film, scheduled for release on Friday, February 12 (i.e. today). Threat of violence is keeping the movie goers away and cinemas empty - many of whom refused to show the movie in the first place.

But is Shah Rukh budging. He is being asked to retract his statement,

He is apologetic to his commercial partners.

I would like to apologize to Karan Johar (the director), I apologize to Kajol and I'm immensely sorry to all our business partners that because of what I say or what I believe in the film and the work is going to be affected. 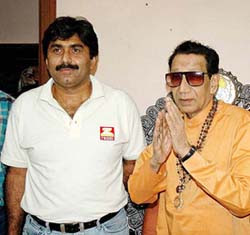 Remember that not long ago Javed Miandad had to go and meet the Goon in Chief of Shiv Sena to seek permission on behalf of the Pakistani cricket team to play in Bombay. Photographic evidence attached.

I am going to be one of those who will contribute towards making sure that Shiv Sena's goons don't make him suffer financially. I am buying a ticket and watching the film. You are the Khan, Shah Rukh.
Posted by Chaudhry Javed Iqbal at 17:00