These were statements of Mulana Abdul Aziz, cleric of Lal Masjid in Islamabad during the stand off with government in 2007 - times when his religious baton wielding burqa clad girls platoons were terrorising neighbourhoods in Islamabad. Kidnappings, torture and humiliation of alleged infidels was a daily occurance and federal capital was under virtual seige. The operation he so wanted to happen resulted in around 200 deaths at the mosque.

Maulana has been under "house arrest" since and has been released last week on orders of the Supreme Court of Pakistan. The August Court had due reasons to order his release - because the government had the Maulana arrested not for inciting terrorism, or for training suicide bombers, or for being directly responsible for deaths of soldiers and para military personnel who were trying to bring his militants under control, or for indirect responsibility for the deaths of scores of innocent young students who died in the cross fire - but for alleged corruption and land grabbing at Children's library and then failed to provide adequate evidence to convict him. Reminds one of American government trying to get Al Capone on tax evasion. 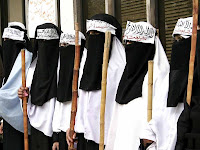 Maulana is now back at the same Lal Masjid that by early 2007 had become a rallying cry for Taleban style militancy right at the heart of Pakistani capital. General Musharraf's government did not act against the Maulana and his religious Mafia because he was using them as a scare tactic against the western governments to legitimise his continued stay in power and for continued military aid. I wonder what is the present democratically elected government's argument for not prosecuting him for the crimes he committed in 2007.

Maulana still believes in the same philosophy of imposing his own form of Sharia through coercion "the 2007 siege had been a necessary sacrifice", he told those who came to welcome him back. "Hundreds were killed, many were injured. But today the whole country is resounding with cries to implement Islamic law. We will continue with the struggle...now Islam will not remain confined to Swat. It will spread all over Pakistan, then all over the world."

I sympathise with those in Pakistan who would like to see Sharia as the basis of law and justice. This is a democratic right that should be achieved through democractic means. But people who believe in Maulana's teachings are also aware that a relegious hegemony cannot be achieved through democracy because a vast majority of Pakistanis will not vote for them. What's happening in Swat is an example - what Taleban minded groups could not achieve when they rode to electoral victory in North West Frontier Province in 2002 on the wave of anti-American sentiments, they achieved through violent miltant activity in 2009.

Maulana Abdul Aziz is claiming to achieve the same in Islamabad. Like him General Musharraf has blood of over 200 people on his hands because he did not act in time to stop Lal Masjid becoming hub of militancy in Islamabad. I hope that President Zardari and Prime Minister Gilani will show the courage to nip this evil in the bud.
Posted by Chaudhry Javed Iqbal at 13:30